How long is a piece of string?

When we speak about  ‘complex’ questions, we’re referring to those that require consideration of several factors in the formulation of answers.  Common examples include:

The fact is that many factors will need to be considered when formulating a response that is appropriate to your circumstances…so there is no simple answer to any of these questions.

Our only possible response, in the absence of much more circumstantial information is one of…Enough.  Enough aeration to provide oxygen to the fish, plants and microorganisms that facilitate iAVs. Enough pumping capacity to manage water quality and to irrigate the plants.  Enough fish to nourish the plants.

Having all of this information to hand is one solution to simple questions in complex situations…but is it the best one?

So … to questions such as with this example, I recommend that the petitioner investigate (learn) what the applicable factors influencing your decision are, to accurately assess your personal circumstance/situation in context, and then act accordingly to that need.  I cannot know the many details of your unique situation and I have no personal obligation to learn/list them and/or pry-out the specific influential criteria in your situation and then do the necessary calculations for anyone.  Not to mention, that just ‘giving’ an answer (guaranteed to be inappropriate), does not allow someone to learn what it is that they need to know.
If you have a need to know something, its up to you to learn what the relevant factors are in making an informed decision that will be appropriate to addressing your need.  Presuming literacy and numeracy, ‘Google’ is your friend to learn what you need to know and then know what to do to address meeting your goal.  I cannot and should not be expected to do that for you (anyone).
Your mind is your survival tool.  Employ it purposefully.  The only person responsible for your every action and therefore outcome is you.  Learn > Act > Grow  !!    Learn more > Act from understanding > Grow further !!     Repeat, repeat, repeatedly.
=====
In other words, don’t ask me what you need – find out for yourself and then you’ll know 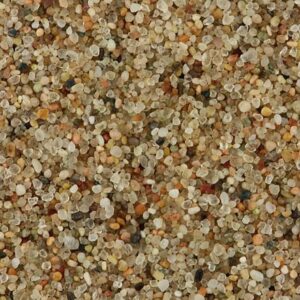 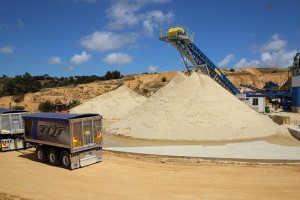 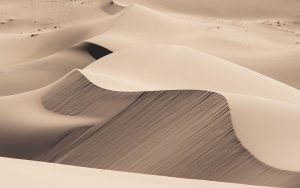 When we used the term “sand” we are referring to sand-sized grains (0.25 to 2.0 mm) composed of the mineral Silicon dioxide {SiO2), aka silica crystals, as being typical found in (sourced from) granite and quartz rock.

That the sand used “drains well” … and nearly completely.  “Drains well” basically means going from a fully saturated (completely flooded) condition to when observable (unrestricted) drainage ceases within approximately 10 to 20 minutes from a 1/3 meter deep sand profile – once input pumping has stopped.

Drainage rate (aka hydraulic conductivity) is dominantly influenced by the average particle size but also by the specific particle size distributions (proportions).  Smaller particles (the more of them there are and the smaller they are on average) will produce increased drainage times (slow the drainage rate).  Also, the smaller the average particle size is the more water will be retained (not freely drain),  which would then occupy more of the pore space (blocking O2 and therefore inhibit aerobic organisms which includes plant roots), especially in the lower portion of the depth profile.

That the sand is chemically inert, meaning that it does not significantly change the pH of water coming into contact with it.

In other words, it does not contain water soluble compounds (material), such as Calcium carbonate (CaCO3) or Calcium Oxide (CaO), as two common examples.

With a  source water at pH 7 or below, a pH change of the water with each flooding/return of 0.0 would be ideal,  but pH +0.1 to +0.3 under initial conditions may be acceptable.  Remember than pH is a logarithmic scale, a change of one pH unit (+/-1.0) corresponds to a ten-fold change in the Hydrogen ion concentration.

NOTE: Use of source water above pH 7 is NOT advised.  If your ground/source water is, for example, pH 8, then lower the pH (with an acid, i.e Phosphoric or Sulphuric) to below pH 7, BEFORE adding it to the system.  In such a case, a separate (independent) storage tank expressly for this purpose is advised.  Harvesting and use of rainwater is strongly recommended for virtually all locations.

That the sand contains NO contaminants such as heavy metals, radio-nucleotides, water-soluble salt(s), plant pathogens, or man-made chemical pollutants to include all pharmaceuticals.

These elements are found only EXTREMELY rarely (not a legitimate concern) in manufactured sand (crushed from ‘virgin’ granite or quartz) but MAY be found in certain natural sand deposits, particularly along river banks and lakes downstream or downwind of human/industrial activities.

Beach sand is almost always dominantly Calcium carbonate and therefor is not suitable (exception being volcanic glasses).  Limestone is obviously not viable and neither are most sandstones and other sedimentary composites, unless exceptionally ‘pure’ (99% SiO2).

A final note of CAUTION:  Do NOT accept any vendor’s claim of anything as being true (factual).  Always test the sand source being considered (drainage rate and pH effects) for yourself.  Minimize the risk of potential contaminants by sourcing ‘virgin’ crushed stone.

Further information can be found at:

Sand versus Gravel as a Biofilter Media

Why Does iAVs Use Sand?

The use of sand for use in water filtration pre-dates recorded history. Sand was ‘understood’ to be a highly effective means of purifying water by the Babylonians, ancient Africans, Chinese, Egyptians, Israelis, Native Americans etc … albeit that they did not know ‘exactly’ how or why it did so (microscopic particles and microorganisms being totally unknown to them). They ‘just knew’ from direct experience/evidence that it did ‘work’ and worked well with little to no effort.  That’s truly all that they actually needed to know … and in reality, that’s basically all that anyone (you) really needs to understand … it just works … every where and every time.

This is FAR from a new concept or novel technology and as such not alleged (by me) to be an invention in any way, shape or form.  Sand filters remain the preferred filtration media, still in continuous use today, by for example professional aquarium managers such as at SeaWorld and Epcot Center.

Sand filtration is basically ‘fool proof’, works every time, automatically, effortlessly and effectively.  Sand (Silicon dioxide e.g. quartz) does not break down, wear out or need replacing (within reason) and is basically infinitely recyclable.  Even if/when it might eventually become ‘overloaded’ with organic ‘wastes’ it can easily be cleaned, flushed and reused repeatedly. And if that should ever present ‘too much hassle’ for someone, it can always be sold (as a value added product) as a soil amendment to organic gardeners, farmers in regions with heavy clay soils, golf courses and likely put to other uses.

When (medium to medium-coarse) inert sand is employed to filter ‘waste’s from aquaculture, the sand surface physically strains the suspended solid ‘waste’ fraction (particles, including microscopic) from the water, leaving it at/near the surface exposed to Oxygen and rapid decomposition.  Sand has an extremely high specific surface area (composite surface area by volume) for soil microbes to attach and/or inhabit,  A well-drained sand is approximately one-third pore space (atmosphere) by volume.  This means that a non-saturated (drained) sand has ample atmosphere (21% Oxygen or 210,000 ppm) to support vigorous aerobic soil microbial communities.

Products of the initial ‘waste’ decomposition occurring at/near the surface migrates(moves) down into the subsurface sand with each subsequent irrigation event, where these compounds are sequentially ‘processed’ (metabolized) by multiple species of soil microorganisms.  A diverse soil ecosystem develops naturally and autonomously. which progressively, biologically transforms the fish ‘waste’ products (both the solid fractions and solutes) into nutrient forms that vascular plants grown in the sand will assimilate.   Plants grown in this organic-rich sand (soil) perform the function of filter cleaners by extracting their nutrient requirements from the sandy soil and thereby limiting/preventing toxic accumulations.

In Summary, the use of sand as an extremely effective and highly practical filtration media is not Not NOT a ‘new’ or in anyway a novel technology. It has been consistently proven effective for at least 10 millennia (probably far longer) and there is absolutely nothing about sand or sand filters in the digital age that can/will ever change that in the slightest.  Similarly, “soil” (mineral + ‘organics’ + aerobic microbial life) is well understood to support vigorous plant growth.  Removing aquaculture ‘wastes’ from water permits the return of clean water for reuse.  Providing organic-rich fish ‘wastes’ along with abundant Oxygen and water to a mineral substrate (sand) will support rapid plant growth with high yields.  That is what iAVs does (is).

PS: Neither gravel nor expanded clay pebbles has ever been known/shown to be an effective filtration or water purification media. … not in pre-history (assumed), over recorded history, and certainly not over the past 27 years of fraudulent nonsense disseminated at the speed of light by willfully gullible modern-primatives.

Most of the articles on this site endeavour to enlighten readers as to what iAVs is.  We thought it would be interesting to canvass all of the things that it is not.

We keep saying that iAVs is simple to understand and easy to build and operate.

Here’s iAVs in  5 steps (images not necessarily to scale). 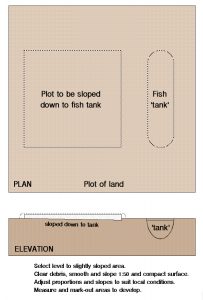 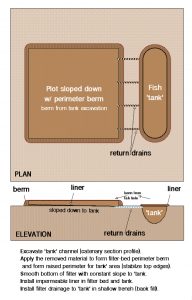 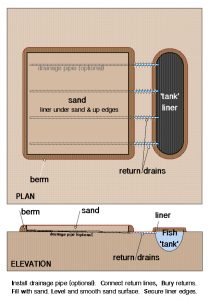 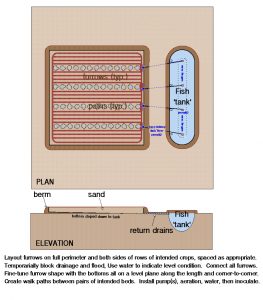 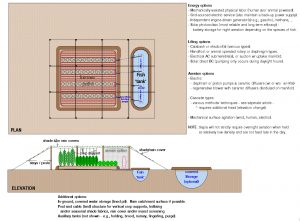 Proportions depending on loading (fish density and feed rates),

Simple doesn’t have to mean dull or inflexible….particularly where iAVs is concerned. 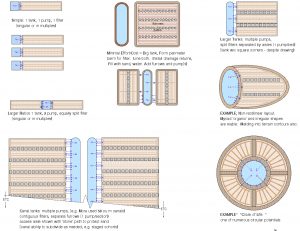 One of the questions that crops up from time to time is…..”Do sand beds need cleaning?”

No form of so-called ‘aquaponics’ is a perpetual motion machine.  Every ‘system’ type requires periodic maintenance – and iAVs is no exception to the rule.

Everything that one inputs into a ”system’ remains in that ‘system’ until it is removed in the form of fish and plant tissues – or mechanically by the system operator.

The longevity of a iAVs biofilter will be influenced by many factors.  Such factors include:

One of the many benefits of sand as biofilters is that sand can be repeatedly cleaned and reused.

Some aspects to monitor for clues when you will need to change/clean your sand of unwanted accumulations:

Some thoughts on cleaning sand of accumulated/ excess material

Viable/economic options for (potential) ‘disposal’ of used sand include:

Once we come to grips with the idea that all growing systems (including iAVs) require periodic maintenance, the next question to arise is…”How often will iAVs sand biofilters need to be cleaned?”

The simple answer is that we don’t actually know.

The investigation of iAVs happened over a period of a couple of seasons.  Similarly, the USDA-sponsored commercial trial was limited to a couple of years.  While the sand biofilters were still operating effectively at the conclusion of the research – and the commercial trials – it is not possible to say with any certainty what their lifespan would have been.

What can be said in support of an extended lifespan is that the commercial trial was conducted with far heavier fish loads than were necessary to support the plants that they grew.   Indeed, the fish biomass in their system was sufficient to support at least double the number of grow beds they used.  That those sand beds were still operating effectively under such circumstances speaks well of their durability.