I completed the sand bio-filter – and the DWC grow tank – this week. 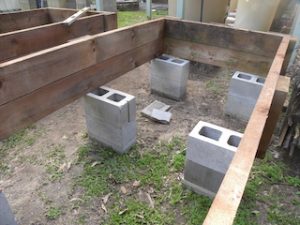 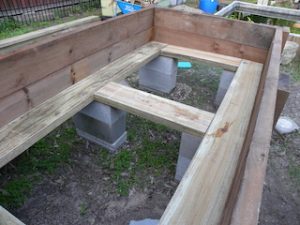 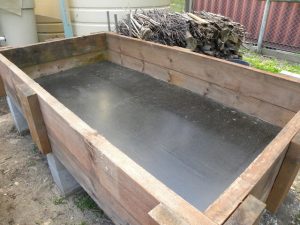 A sheet of 19mm formply completes the structural aspect of the growbeds.  I should point out that I tend to over-engineer things…but this was also probably the most cost-effective way to accommodate my circumstances.

My next task is to install the drains in the growbed and tank.

This system has had no end of incarnations.  It was a worm farm, then a quail breeder pen, then an ebb and flow hydroponics seedling propagator, then a worm farm again…and, this week, it’s back to being an ebb and flow hydro system again.  I filled the grow bed with expanded clay pebbles and hooked up a pump and timer.  I planted a bunch of leggy pak choi seedlings – just to get things growing.

Currently, this unit (and my other hydroponics systems) are running on packaged nutrients. It’s a two-part dry powder mix…and each part is mixed with water to produce 20 litres of nutrient solution.  It’s easy to use, cost-effective and entirely predictable in terms of its growing performance.  It’s still my plan to use nutrients that are sourced from organics but, until I get that sorted out, the packaged stuff will suffice. 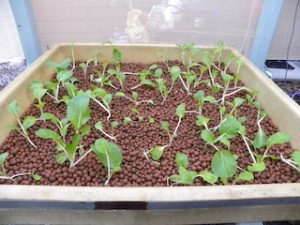 I have a love/hate relationship with IBC’s

The IBC basic flood and drain system…and it’s retarded little brother, the ‘chop and flip’ system…are to be found in their thousands in backyards throughout the world.  They are usually slightly oblong in shape and are constructed in such a way that it is generally difficult to concentrate and remove particulate wastes.  They are, therefore, a poor choice for use as a fish tank.  They are also party to what fate has done to the iAVs system…and, for that, I’m not a fan.

As a systems freak, however, I’m fascinated by IBC’s…so this project is about exploring some of the ways in which they can be used in waste transformation farming. 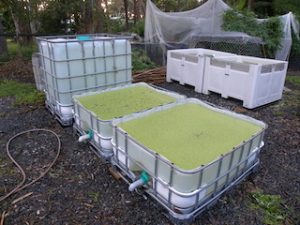 Currently, these IBC components are serving as water storage and two duckweed tanks. That will change within the coming weeks as I begin to showcase the range of uses to which these vessels can be put.

Mega bins are very useful containers for micro-farming.  My short term plan is to grow duckweed in these two bins. 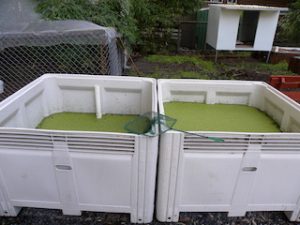 I have my two grandsons (11 and 13 years respectively) visiting with me for the school holidays.  Both are fairly typical products of the education system which parrots the societal mantra…”Do as you’re told. Study hard in school.  Get a good job.  Be Happy.”

Intertwined with all of that is the “Great Australian Dream” of buying one’s own home (over a period of 25 – 40 years) – for which one spend the best years of one’s life working to provide shelter for oneself.

We delude ourselves into thinking that if we do these things, we’ll have made it…but those who cannot achieve this ‘blissful’ state are deemed failures.

I believe that the education system exists for two reasons…to produce compliant workers – and to self-perpetuate.

I’ve long been aware that, if this nonsense works for anyone, they are few in number.  It certainly didn’t work for me.  What I achieved in life was in spite of the education system rather than because of it.

After considerable thought, I’ve decided to ‘apprentice’ my grandsons.  The indenture is not a formal trade…like building, engineering or cookery.  It’s an Apprenticeship in Lifestyle Development.

It seeks to provide them with the knowledge, skills and experience to chart their own course…to achieve freedom from the bonded servitude and usury under which most people will exist…and to experience a satisfying life.

They will learn how to produce their own food…and provide their own shelter.  They’ll learn how to design and make things…and they’ll discover how to acquire the means of exchange through owning and operating their own enterprises.

That’s it for this week.  Feel free to comment or ask questions.  Until next week, keep growing – and take it easy.