This is Chapter 2 of the Urban Aquaponics Manual – 4th Edition.

It’s an important idea to grasp because there are people that would have you believe that aquaponics is somehow different to (and better than) aquaculture when, in fact, aquaponics is a sub-set of recirculating aquaculture.

Aquaponics is the integration of recirculating aquaculture and hydroponics

For practical purposes, an aquaponics system is a recirculating aquaculture system…to which a hydroponic growing system has been attached.

It’s not just a philosophical distinction.

So, let’s get better acquainted with the most effective way to create that environment.

These three things (and some water, fingerlings, a freshwater test kit and a bag of feed) are the visible elements of a basic recirculating aquaculture system (RAS). 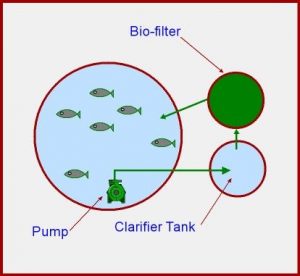 But that’s not the entire picture.

The act of feeding fish in tanks will produce metabolic wastes that convert to substances that will eventually reach toxic levels and kill them.

To overcome this problem, we take advantage of a bio-chemical process called the aquatic nitrogen cycle. 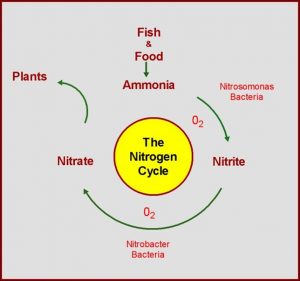 Since the aquatic nitrogen cycle is arguably the most important thing to understand about aquaponics, let’s begin there.

The microbiology that underpins aquaponics is complex. Fortunately, however, a working knowledge of the aquatic nitrogen cycle is all that is required to operate an aquaponics system and to make informed decisions around its design.

In the previous chapter, I used the term “beneficial bacteria” to describe those organisms that drive the microbiology that underpins aquaponics.

This process, known as nitrification, begins with ammonia.

OK…so where does the ammonia come from?

Fish ingest food through the mouth and break it down in the oesophagus. The food is digested in the stomach in finger-shaped pouches that secrete enzymes while absorbing nutrients from the food.

Other organs, like the liver and pancreas, secrete other enzymes and chemicals as the food passes through the digestive system. The process of digestion and nutrient absorption is completed in the intestine.

Some of the wastes arising from digestion of the food diffuse through the gills while the kidneys filter out wastes from the blood. Solid wastes are excreted in the form of urea, uric acid and faeces.

Fish pass water across their gills and the oxygen is extracted from the air and the remaining gases (plus the carbon dioxide produced through metabolism) pass back into the water – with the nitrogen – in the form of ammonia.

The solid wastes, which also include uneaten food, eventually yield ammonia – through a process known as ammonification.

The family of bacteria that facilitate this mineralisation of organic nitrogen into inorganic ammonia are called heterotrophs.

We’ll take a closer look at heterotrophs later. For now, it’s enough to know that we have ammonia – and that we know how it came about.

Ammonia presents in two different forms – ionized and un-ionized – depending on the pH of the water.

Ammonia becomes increasingly toxic as the pH increases – but let’s just agree, for now, that ammonia is toxic to fish once it exceeds certain levels.

The challenge that confronts us now is to remove the ammonia – or to convert it to something much less harmful.

The easiest way to remove the ammonia is simply to change the water in the fish tank and replace it with fresh water.

And that’s how some traditional aquaculture systems worked. They’d simply divert flow from a stream or river and run it through their tanks or ponds and then back into the river. While I’m aware of some trout farms that work this way, they wouldn’t obtain an aquaculture license – in most places – these days.

Indeed, this “flow through” approach is unacceptable for most situations – for the sheer waste of water (and the pollution potential) that it would involve so we’re left with the option of converting the ammonia to something less harmful.

To this end, allow me to introduce you to a family of bacteria known as the autotrophs.

Where heterotrophs generate ammonia, autotrophs use it and, in so doing, produce other forms of nitrogen.

The process by which autotrophs oxidize ammonia is known as nitrification – a two-step process that allows us to create a safe environment for our fish – while limiting the amount of water that we use.

Like ammonia, once nitrites reach a certain level they become toxic to fish .

When the nitrite levels in the water reach a certain point, other bacteria (nitrobacter/nitrospira)* begin to colonize the system. These bacteria convert nitrites to nitrates, which are (relatively speaking) harmless to the fish.

* While many people believe that Nitrobacter are the main nitrite-oxidising bacteria, Dr Timothy Hovanec has determined that Nitrospira have that distinction. For backyard food production purposes, the precise identification of nitrifying bacteria is of relatively little practical importance. Suffice to say, shit (in a biological context) happens – and it gets converted to plant food.

Notwithstanding the rather more benign nature of nitrates, there are issues associated with allowing nitrate levels to build up too much.

Like ammonia, we have two choices around nitrate – we can remove it – or we can use it.

Removing the nitrate, as every aquarist knows, is achieved by regular water replacement…and this is also what happens in most recirculating aquaculture systems.

As it happens – and this is the other good news about the relationship between fish and plants – the nitrates are also plant food.

By growing plants in the water column, we are able to remove the nitrates – a classic win-win situation in which…

“Put simply, you feed the fish and they produce wastes. The bacteria turn the fish wastes into plant nutrients.

In effect, the fish provide nutrients for the plants and the plants clean the water for the fish.”

The other good news is that, by having the plants regulate the nitrate levels, we can reduce the amount of water that needs to be replaced.

Anyway, in a nutshell, that’s how the aquatic Nitrogen Cycle works!

It’s also Aquaponics…about which we’ll learn more in a future chapter. Right now, we need to get a better handle on filtration – and that’s where we’re heading in the next chapter.

In the meantime, I invite you to comment…to express any concerns that you may have…and to provide ideas or suggestions that you feel will improve the book – or add value to it.