One evening, in early 1976, I walked into the Third World Bookshop – my favourite book haunt – in Adelaide’s Hindley Street night quarter.

About twenty minutes later, I emerged with a book that was to help chart the course of my life.

Written in 1943, “The Have-More Plan – A Little Land and a Lot of Living” was destined to become one of the classics of the back-to-earth genre. 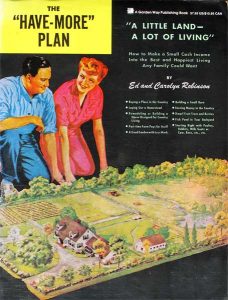 In just over 70 pages, authors Ed and Caroline Robinson provided their prescription for “how to make a small cash income into the best and happiest living any family could want.”

The book’s lifestyle promise proved to be an irresistible lure for me…to the point where we embarked on our own quest for self-sufficiency.

In late 1976, my family and I moved from suburban Adelaide onto a neglected 20-acre olive tree farm on the urban fringe.

In the ensuing years, we moved from one rented farmlet to another before buying our own house.  While the addresses changed, the general self-sufficiency idea remained constant.  We aspired to the Robinson’s suggestion of “the best and happiest living any family could want”…and we rode a learning curve like the Big Dipper.

The need for information relating to a project led me to my bookcase and, as I shuffled through a box of books, suddenly there it was in my hands – my copy of ”The Have-More Plan.”

I re-read the book three times in the week after its re-discovery.

On the first such occasion, I experienced the same sense of exhilaration that I did when I first read it 38 years ago. I even found myself being drawn into the back-to-earth call to action.

The Have-More Plan is a reflection of its age.   While much of its content is timeless, the book is a social snap-shot of the US middle class in the early 1940’s – complete with beliefs, values and behaviours to match the period.

During the second reading, I paused on the Robinson’s call-to-action – to move to a place in the country.

While being on acreage has its merits, much of what is discussed in the Have-More Plan is no less applicable to an urban backyard.

Most people, it seems, aspire to happiness and it’s my perception that they should be able to do that regardless of their age, ethnicity or financial circumstances…or whether they live in the city or the country.

It was during the third reading, that I realised that, for me, the real legacy of The Have-More Plan is the idea that the pathway to happiness is…self-reliance.  What began as an attempt to underpin our own food self-reliance later branched out into other areas like finance, housing, and transport.

In acknowledgment of the impact that The Have-More Plan has had on my life, I’ve named my island micro-farm…Have-More Farm.

You can obtain a free PDF download of “The Have-More Plan”…HERE.