On the Relative Efficacy of iAVs

Considering ‘The Good, the Bad, and the Ugly’ :

The ONLY accessible/discernible so-called ‘data’ available from any “Aquaponics” technique , other than iAVs, is from the so-called “raft technique” as demonstrated at The University of the Virgin Islands (UVI) by Dr. James Rakocy et al.

These facts ‘makes’ (establishes) the UVI program to have been a protracted (ntm Deified) “Demonstration of Concept” and NOT a scientifically conducted study, experimentation, research, nor a designed, elucidated, refined system.  This is not a matter of personal opinion, susceptible to conjecture, or a matter in dispute, but rather demonstrable fact.

To my/our knowledge and to date, no UVI/DWC ‘system’ (nor F&D either of that matter) has ever been subjected to (scrutinized, vetted, approved) or published in any peer-review, refereed scientific Journal of any field, with the sole exception of iAVs (here).   There are several valid reasons as to why not, being dominantly due to the meticulous, if not also calculated, total absence of acceptable (valid) scientific investigation methodology.

In the Sciences (including applied research, engineering, technology) self reporting (e.g., Press/media, Books (or chapter), Conference Proceedings, seminars, Symposia, websites/forums/youtube, Workshops, etc.) is not considered to be “Publication” in Science.  Self-reporting is instead principally viewed as self-promotion (biased, posturing, self-aggrandizement), notwithstanding the forthcoming inevitable wave of contrary argumentation.   Apparently, today, the Internet’s vast reach, capricious integrity and hypervelocity is effectively consigning both convention and integrity in applied Science to oblivion … but I digress.

“There are in fact two things, science and opinion; the former begets knowledge, the later ignorance.”  ~ Hippocrates

High School level “Science Fair”, or “Show & Tell 2.0” pseudoscience and “Pop Science” are not deemed to be legitimate investigation, or applied research, development, explanatory, inquiry, validation, ‘proof’ of anything at all, or valid Science in any way, form or sense.

The above holds as true of every UVI disciple, mimic, pretender, shill, supplicant and sycophant du jour to dateª , as it does across the entire spectrum of “Aquastrology“© , without exception, and wholly regardless of the extent of expenditures in funds, time and ‘fluff‘ (evangelism, publicity, conjecture, fallacy, hype, spin, woo, … ) applied by the manifold purveyors of fantasy, predators on gullibility, sordid ‘seminarians’, and related merchandizing bandits.

The gross conceit as exhibited by hundreds of overt charlatans claiming certain knowledge related to so-called ‘Aquaponics’ is the very antithesis of Science, ntm of ethics, integrity, morality, and rationality.  This burgeoning manifest pretense of knowledge will never result/coalesce in viability of commercial/meaningful application.

“One can ignore reality, but one cannot ignore the consequences of ignoring reality.”  ~Ayn Rand

The ‘holy’ Styrofoam™ raft floated in a tepid bubbly bathtub ‘method’ of so-called ‘aquaponics’, as ‘commercially‘ propagated, promulgated and proliferating from UVI (and subsequently emergent variants hyped by aspiring profiteers, globally), is also referred to as Deep Water Culture (DWC).

There are MANY significant differences in method, biology and result between UVI/DWC and iAVs ; far too many, in fact, to attempt an elucidation here.

Any role for soil microorganism communities in nutrient conversions/element cycling is non-existent in the UVI/DWC approach. Terrestrial ecology is deliberately discounted and ignored; instead allegedly ‘met’ through various attempts at compensation/adjustment by investing in strings of specialty tanks and mechanical equipment coupled to automated electronic monitoring technologies, that in combined effect literally ‘feed’ (fill) sludge lagoons.  This is NOT ‘exactly’ edible, marketable, nutritious, pleasant, tasty, … nor remotely rational, IMO.   It’s not too difficult (for rational primates) to appreciate that “DWC” could coequally ‘stand for’ (describe) “Deliberate Waste of Crap”.

The net result is that UVI/DWC is nowhere nearly as efficient as iAVs is in either resource utilization or in food value produced per unit area, volumes, and (or) time.  Which is to say nothing of any alleged profitability in a commercial context or viability in a third-world village.

[ ª Sure, I could easily be far more specific, i.e. cite individuals.  But willfully ignorant pretentious charlatans and sanctimonious addle pates with access to million dollar budgets can probably afford lawyers – and I can not!  Do note, “Turds float & stench rises.” If you’ve previously noticed this phenomenon, then you’re probably one in a million. ] 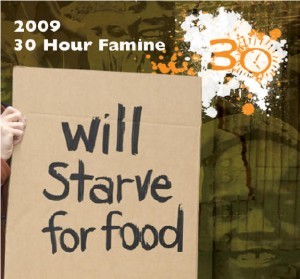 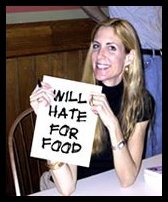 Where do you ‘fall’ along the continuum?

Now, for your dining delight, on to the GOOD ‘news’  …

In stark contrast, the iAVs is FAR simpler to create (establish), to operate (manage), with MUCH higher resource use efficiency and FAR greater productivity and thereby representing a highly significant potential for exceptional profitability.  Additionally, the iAVs excels in the production of high-value (in both nutritional and economic terms) fruit-bearing crops, such as Achenes, Brassica (cole spp.), Capsicums (peppers), Cucurbits (cucumber, melons, squashes), Legumes (beans, peas), Solanum (eggplant, tomatoes), and some root crops – in addition to all ‘greens’, culinary and medicinal herbs.

The graphic below compares UVI with the iAVs in several key productivity metrics, each of which clearly differentiates (distinguishes) the efficacy of the iAVs from the UVI/DWC method.  The UVI ‘data’ (reported result of a trial) applied in this comparison is, to our knowledge, the ‘best’ production result obtained at UVI in 25 years of repeated one-off trials.

The iAVs Lo-tech data (values below) were derived (reduced by 40%) from the productivity means (of 16 ‘systems’; 4 ea. at 4 v:v ratios) in repeated, replicated clinical trials (scientifically designed experiment).  The iAVs Hi-tech yields (below) reflect a 10% reduction of yields resulting from the USDA-sponsored iAVs Commercial-scale Demonstration Project conducted in 1992-93 by Dr. Boone Mora and Tim Garrett (both novice growers/managers).  All calculations (from an Excel spreadsheet, not shown) were premised on (derived with) the fish grow-out tank(s) set at identical volume.  Lighter color bar extensions to indicate the potential for further yield increases.   (source citation below graphic). 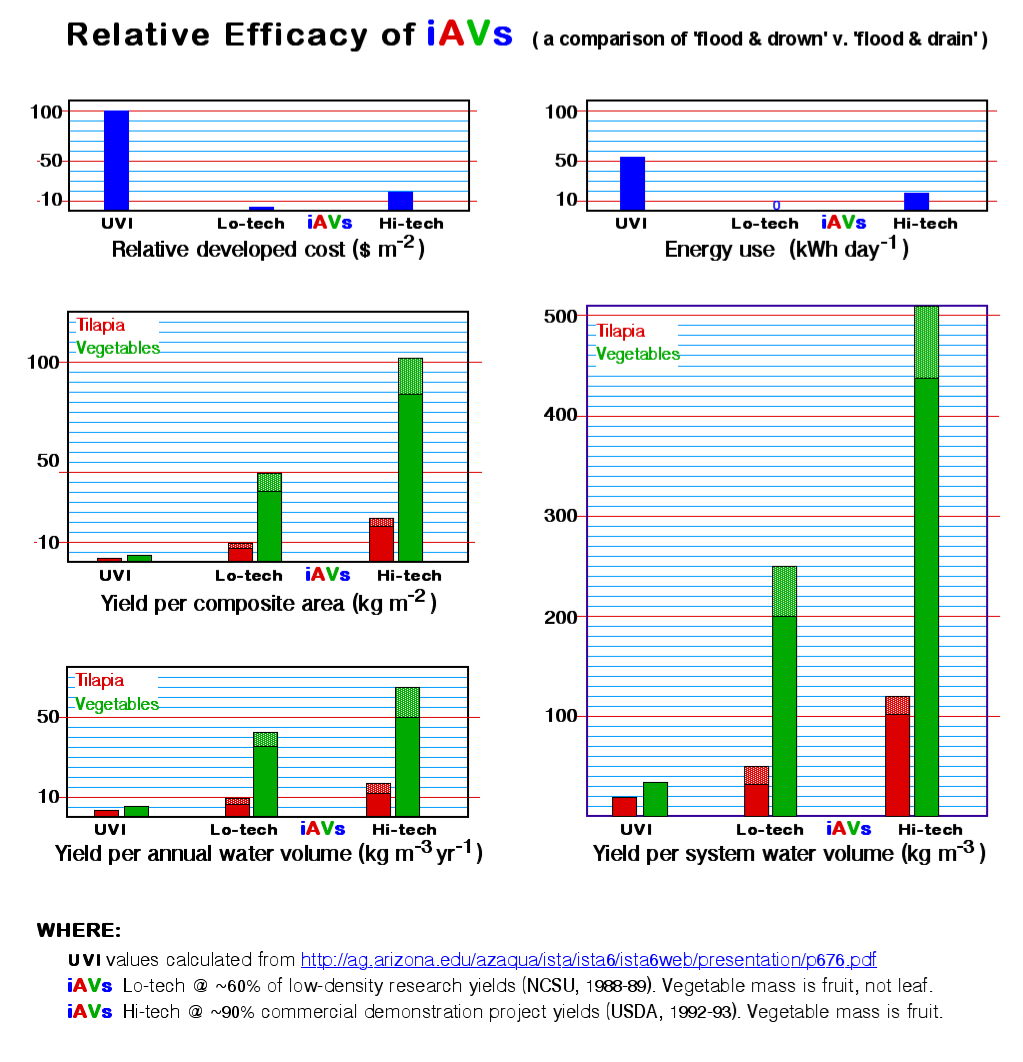 “With Lo-tech iAVs, each liter of water employed [‘system’ capacity plus (a high of) 2.5%/day ‘loss’ rate x 365] can produce, in fish and fruit, at least 0.7 g DW protein [6 g LW Tilapia, 2.8 g FW flesh], 7+ kilo-calories of food-energy, and most essential minerals and vitamins. This level of productivity is two to three orders of magnitude [100 to 1000+ times] more efficient in the use of water than open-field production in the U.S. (i.e., corn, soy, … and catfish, poultry, …).” ~ H.D. Gross, 1988.   Hi-tech iAVs (actually, moderate-tech) has already virtually doubled yields, with several ‘avenues’ available by which to provide further improvements.

Unique local production factors and prevailing/seasonal market unit prices should be factored in at/for each location.  In general, all food groups globally are and will continue to increase in value, especially as water availability for agriculture is impacted by persistent drought in primary production regions.

Two principle applications of the iAVs technology are readily apparent. One is as a small-holder activity using local inputs, providing food self-sufficiency plus a surplus for the cash market. A second application is as large-scale, commercial enterprise(s) sited near population centers. Either approach could be combined with ongoing water harvesting, gardening, or greenhouse projects, planned or already in place. This technology was expressly developed for and is eminently applicable to the requirements of regions where water and/or land resource availability are dominantly limiting to food production.

“Of all man’s miseries the bitterest is this, to know much and to have control over nothing.” ~ Herodotus 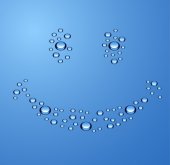 Finally, a dishonorable mention for ‘the UGLY’  …

A comparison of iAVs’ proven productivity with ANY (all) other so-called ‘Flood & Drain’ -ponics is NOT even minimally possible.

This is due to:

1) a categorical absence of any reported metrics; methods, parameters, yields, et al. – anything by/from anyone, anywhere, whatsoever (TMK) – which presumes that any supportable claims could in fact be developed – and,

2) the prevailing, ubiquitous, abject, calloused, apparent, odious, and willful ignorance of the scientific method generally, and in regard to (for) biological and ecological systems research/clinical studies* specifically.  Empirically, this explicitly includes ALL of the ‘High Priests of Ponics’ and Cyber-Sect ‘leaders’ of “Aquastrology” lore and voodoo woo.

They know who they are.   You should too. 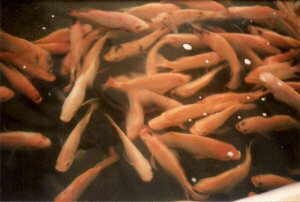 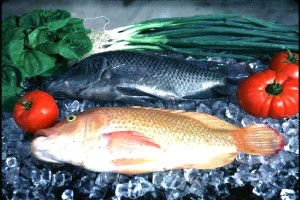 “All truth passes through three stages. First, it is ridiculed. Second, it is violently opposed. Third, it is accepted as being self-evident.” ~ Arthur Schopenhauer         [ Fourth, it is corrupted, debased, perverted to impotent irrelevancy.] 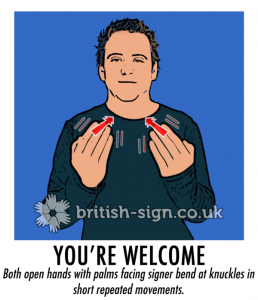