I thought I would give all who are interested a recap on my experience with my iAVs in my backyard. Like a good many of you, I have a full-time job, but I long to be out in the greenhouse most of the day/night!

I had operated a deep water culture (DWC) setup starting in 2011, but struggled to keep it productive between temperature swings, bugs and lack of time to attend to the system.  When fall came, it was time to harvest the Tilapia and wait for next spring to get started again…..I really knew that I wanted/needed a greenhouse.

I came upon a German engineer who had designed a greenhouse modeling the Chinese Solar Greenhouse lean-to model which incorporated a DWC system as a part of its energy mass.  As good fortune would have it, I had an opportunity to visit Frankfurt in 2013 during the bi-annual ginormous trade show – ISH-Frankfurt.  My boss and I spent a week exploring the advanced heating technologies that Europe has developed in their mechanical equipment (think Mecca for boiler junkies).  I tracked down Franz via the web and we became email-friendly and he suggested that we spend the week in Heppenheim Germany and take the free train ride into Frankfurt each day to the ISH show – a good plan since hotel rooms in Frankfurt can be $1000+ USD a night during ISH week.  In between daily trade show visits and nightly late drinks in historic Heppenheim’s cobblestone square, Franz would take us around to GHs he had built and show us the energy saving features that he was incorporating into his design.  Very informative and really got the GH construction bug fully energized!

Fast forward to late 2014, I was slowly building out my 24′ x 24′ GH attached to the south wall of my shop building…..following Franz’s general layout for the adapted Chinese design.  My plan was to go DWC rafts again, but when I started following an Aquaponics forum thread discussing the merits of the design-operation of the iAVs. 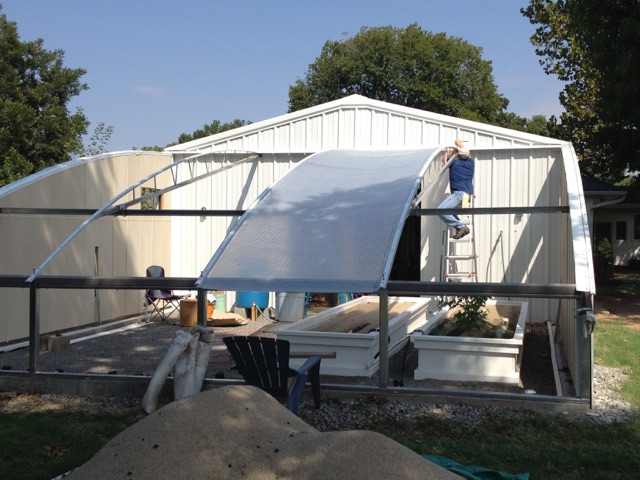 The greenhouse under construction. 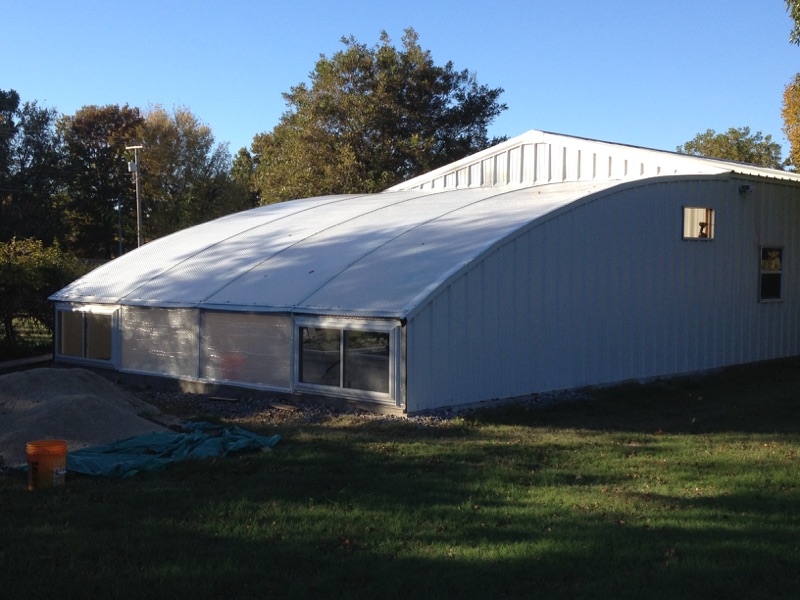 Fortunately I had not gone too far down the track with the DWC and there was still time to take a fork in the road.  I had chimed in a few times on the Aquaponics thread, but could see that there was way too much drama involved in the discussions.  So, I tracked down Dr Mark McMurtry thru an old email address (thank you Google) and we started trading ideas.  (correction:  I would pose an idea and then I would realize that I need to shut up and take copious notes and try to follow the Jedi Master). Dr Mark was good enough to humor me and help me to see that maybe his 30+ years of iAVs experimentation might save me a lot of dead ends and restarts! 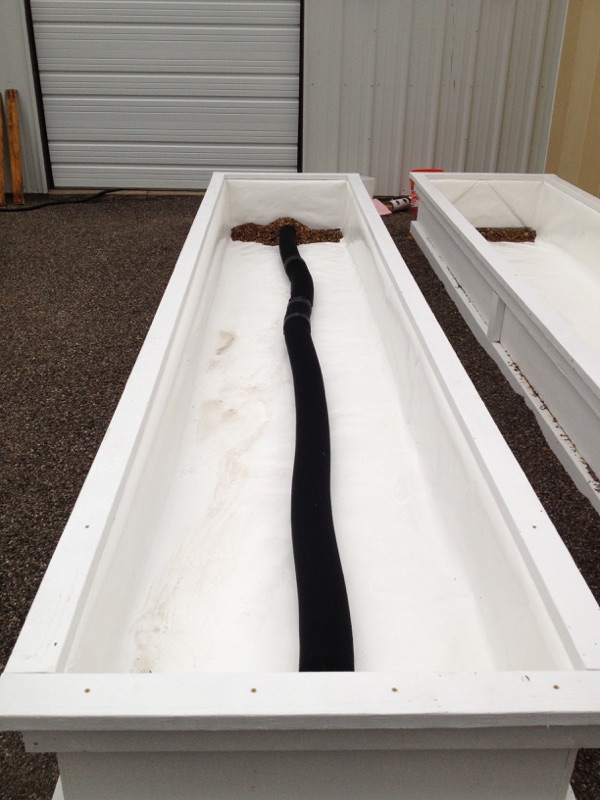 The sand bed before I added the sand.

Unfortunately, I had installed a full underground SHCS heating/cooling system in the floor of my GH which precluding me from setting the fish tank below grade.  Instead I had to install a shallow sump to collect water that drains from the sand filter grow beds and then pump it back up into the fish tank which sits just inside my shop building (see photo for details).  I say “unfortunately” but in actuality I am quite pleased with the performance of the heating system.  Even with outside temps down as low as 15F, the air blowing thru tubes under the GH keeps the temp inside in the mid to upper 40’s……..all done with less than 200 watts of fan energy!  When the sun comes out even on a 20F day, the greenhouse is floating in the mid-70’s within an  hour or two. 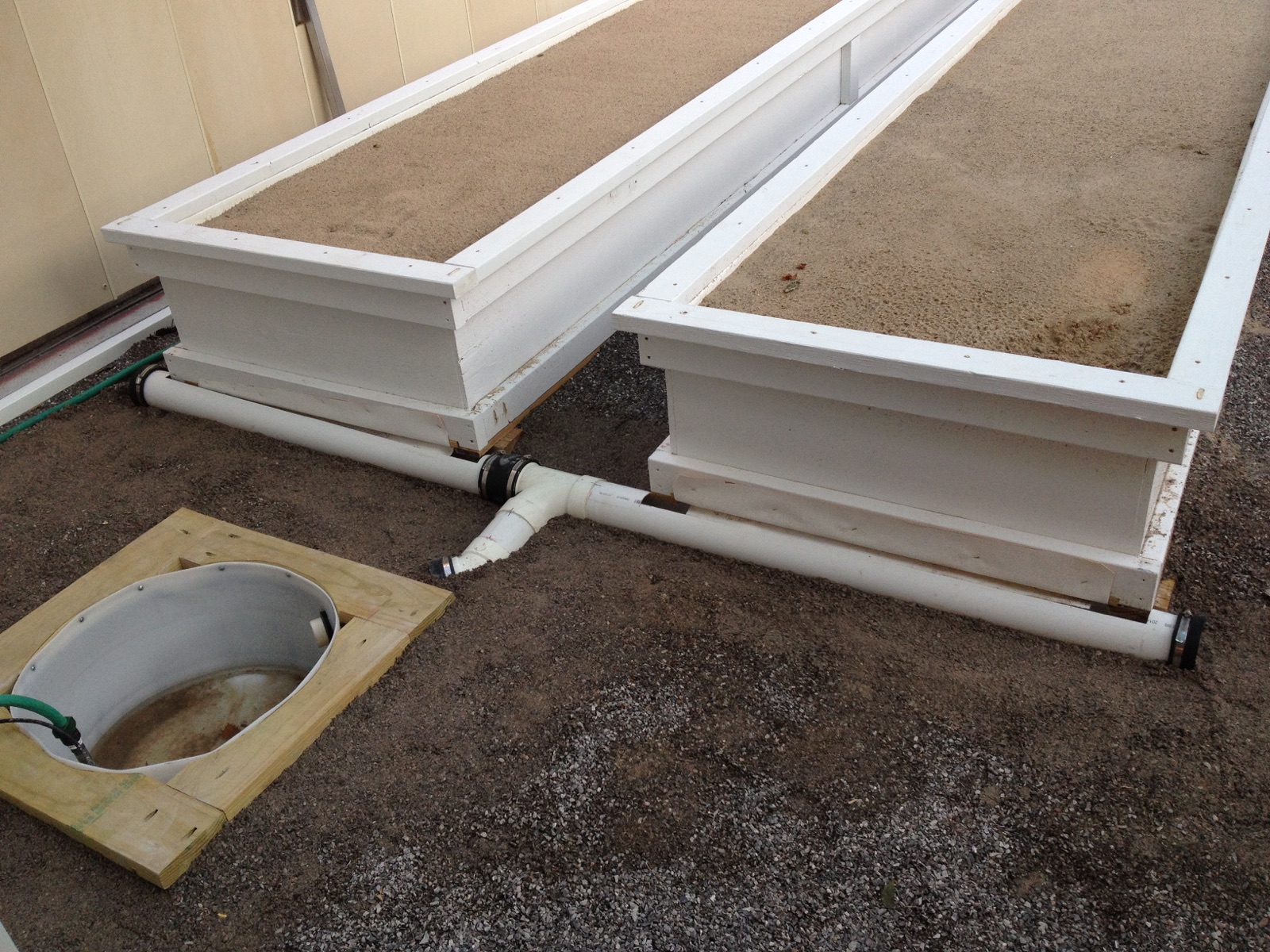 Our use of an underground heating and cooling system necessitated a sump tank. 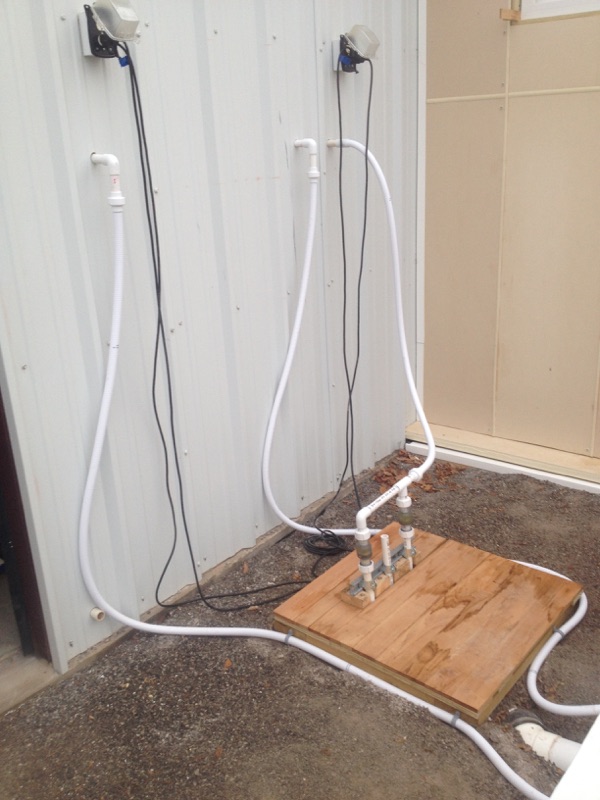 The sump tank with the cover in place.

OK, enough background, now on to the star of the show….iAVs.

Finding the proper sand was time consuming, I had gone to at least 4 different sand suppliers before I found a sand that was “in the ballpark”.  After running a 5 gallon bucket perc (hydraulic conductivity) test as directed by Mark, we determined that the “bunker sand” (local supplier’s name for his coarse sand) was close enough to try.  A few more smaller particles than ideal, but overall the profile was decent.  A minimum percentage of clay/silt was a plus.

So…..my observations regarding the iAVs setup after running for several months.

February 1st 2016 Update:  I have been slowly dosing with 30 gallons of 6.0 pH water treated with Nitric acid every few days.  Although I can barely see the pH trending down (it maybe 7.3 now) the plants have begun to respond.  The greens, broccoli and lettuce are definitely perking up.  I really think the high pH is due to a high alkalinity in my city water, I plan on getting it tested by a local aquarium supply store to confirm what the true issue with pH “lock” really is.

Although I have been general pleased with the stability and growth in my iAVs system, I know that my pH, low water temp and low feed rate have really hampered the true capability of the iAVs system.  I will try to update as conditions improve.  Present conditions notwithstanding, I am pumped about iAVs.  Simple and robust and inexpensive to operate.