When a site has no other option available – i.e., no electrical power for blowers, compressors or pumps – cascade aerators can increase the DO levels of an aquaculture volume.  The ‘whole idea’ is to employ gravity to break a water column (flow) into as many droplets as possible, as many times as possible, which greatly increases the surface area in direct contact with the atmosphere (21% Oxygen).  There is nearly an infinite number of ways to accomplish this.  Below are but a few examples. 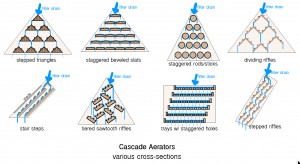 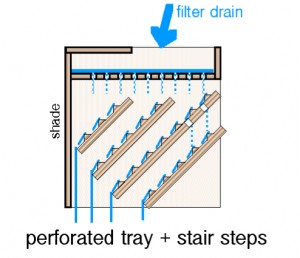 In addition to aerating the biofilter drainage following irrigation events, it would also be possible to aerate the grow-out tank/pool volume without the water passing thru the sand (any hour of the day/night if desired).  Pour/move water onto the top of the cascade directly by whatever means is available.

Also, do try to shade the cascade from direct sunlight.  This reduces evaporation ‘loss’ and heat gained by the water.

Further, even with access to electrical energy for aeration, adding a cascade can increase DO saturation and/or reduce your energy bill.

Cascade Aerators – a cascade aerator consists of a series of steps that the water flows over. In all cascade aerators, aeration is accomplished in the splash zones. The aeration action is similar to a flowing stream. Splash areas are created by placing blocks across the incline.  They are the oldest and most common type of aerators.

Cone Aerators   Cone aerators are used primarily to oxidize iron and manganese from the ferrous state to the ferric state prior to filtration. The design of the aerator is similar to the cascade type, with the water being pumped to the top of the cones and then being allowed to cascade down through the aerator.

Slat and Coke Aerators  The slat and coke trays are similar to the cascade and cone types. They usually consist of three-to-five stacked trays, which have spaced wooden slats in them. The trays are filled with fist-sized pieces of coke, rock, ceramic balls, limestone, or other materials. The primary purpose of the materials is to provide additional surface contact area between the air and water.”

Pooled Stepped Cascade design parameters (technical)  True, this technique is ‘powered’, but some of the same principles apply.