Imagine being able to produce your own freshwater fish and salad – simultaneously – in your own backyard.

The three important elements in any integrated aquaculture system are plants, fish and beneficial microbiology. Put simply, you feed the fish, the microbes turn the fish wastes into plant food and the plants clean the water for the fish.

The best known manifestation of integrated aquaculture is aquaponics – the combination of intensive aquaculture and hydroponics.  Aquaponics is not, however, the only way to integrate the production of fish and plants.

While the fish and plants are the visible elements of the integration, it’s microbiology that makes it all possible.  While this microbiology is very complex, the aquatic nitrogen cycle is easy to understand and is the part that allows for  the conversion of toxic fish wastes into plant food. 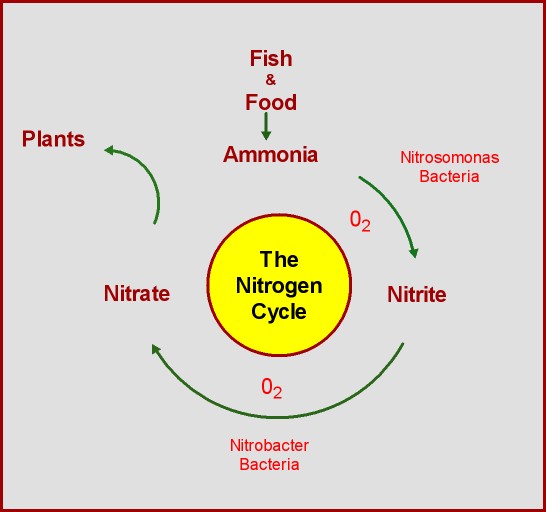 The waste produced by the fish breaks down to produce ammonia.

When the nitrite levels in the water reach a certain point, other bacteria (Nitrobacter/Nitrospira) begin to colonise the system. These bacteria convert nitrites to nitrates (NO3), which are far less harmful to the fish.

While the microbiology associated with aquaculture is complex, the equipment needed is very straightforward.

To produce freshwater fish in your backyard, you’ll need:

That’s it! These three components comprise a basic recirculating aquaculture system. You just add water and some fish……and start doing some water tests.

The first successful closed loop integration of fish and plants was called the Integrated Aqua-Vegeculture System (iAVs).  It was invented by Dr Mark R McMurtry in 1985.

In its simplest iteration, iAVs consists of a fish tank and sand bio-filters.

Subsequent developments saw the emergence of what became known as aquaponics…the integration of recirculating aquaculture and hydroponics.

Aquaponics comes in many forms but the dominant systems are:

Both recirculating aquaculture and hydroponics create a waste stream.  In a conventional recirculating aquaculture system, nitrates are removed through water replacement where a predetermined volume of water is dumped each day. In a conventional hydroponic system, inorganic salts are used to provide nutrients for plants. Once the nutrient levels drop below a certain level, they are also dumped. In both situations, the wasteful disposal of nutrient-rich effluent creates environmental issues.

When they are integrated, however, the waste streams are reconciled – to the benefit of both fish and plants.

Integrated aquaculture is not limited to iAVs and aquaponics. There are also a number of soil-based options.

Since they all grow plants, the choice of a particular system boils down to personal preferences and the availability of resources.

Regardless of the method used, integrated aquaculture differs from conventional horticulture in a number of important ways.

The first (and most obvious) distinction is the source of nutrients – the fish.  Integrated aquaculture effectively provides two crops – one is fish and the other plants – for the same volume of water that it would otherwise take just to grow the plants.

The other very important difference is that, since chemical herbicides or pesticides are toxic to fish, they cannot be used in recirculating systems.  Clean chemical-free food is the result.

The list of Australian freshwater fish that can be produced in a backyard includes:

Every region throughout the world has its own freshwater fish species.

Integrated aquaculture lends itself to virtually any plant…particularly food plants.  The specific method will vary according to the type of plants being grown.

I’ve been engaged in integrated aquaculture since 2005…and I’ve written hundreds of articles on the subject.  In fact, I self-published what was arguably the first book on the subject in the world (The Urban Aquaponics Manual) back in 2007.  This material is being reviewed and will be available on this site.