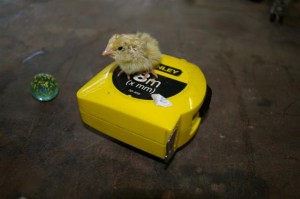 Quail are tiny when hatched.

Quail are the quintessential micro-farmer’s livestock…..and they earn the title on the basis of their unrivalled ability to produce meat and eggs faster, and in greater quantity, than anything on two legs.
The ability of a female to reproduce its body weight in any given year is another measure where the quail is without parallel. A cow is able to produce 40% of its own bodyweight per year and a sheep or goat can produce over 100%. A sow can generate in excess of 400% while a rabbit doe is capable of well in excess of 1000%. A productive chicken (and an incubator) might produce over 200 chicks in a year and their progeny could be bred just 24 weeks later. 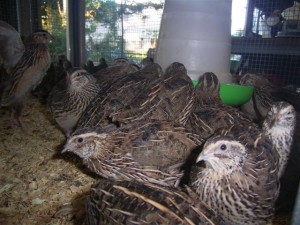 Japanese quail leave them all behind. The quail chicks that hatch today will be capable of breeding in just six weeks. You’ll need a spreadsheet to calculate the annual leverage applicable to these amazing birds.

Quail have been domesticated for a very long time. They appear in ancient Egyptian hieroglyph and the first written record of domesticated quail appears in Japan in the twelfth century AD.

These tiny game birds work like a miniature poultry farm producing gourmet meat and eggs in a breeding cycle of just weeks while occupying just a few square metres of floor space. 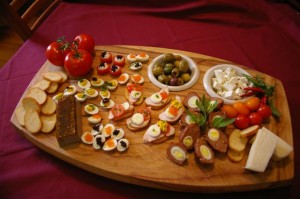 Quail eggs are delectable snacks, too.

They are well suited to anyone who wishes to learn more about how to work with livestock and who would like to experience an entire ‘cradle to the grave’ livestock operation.

Their size ensures that a breeding and growing operation designed to yield 10 quail per week (enough for a meal for a family of four) could be accommodated in a floor space of about 2 – 3 square metres. 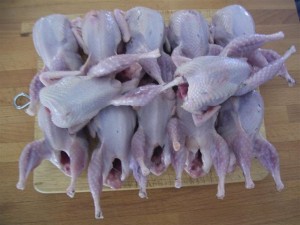 Quail are processed quickly and easily.