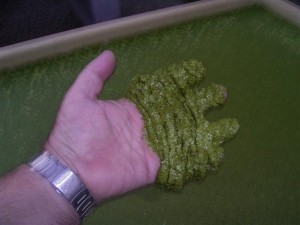 Duckweed – a must have for Microponicists

Duckweed is one of the best-kept secrets of Urban Farming.

It is a high quality feedstuff that can be produced in useful quantities at little cost and with little effort. Of equal interest (particularly in an Aquaponics context) is its ability to remove nutrients from water.

We began growing duckweed in 2004. Initially, we used it to supplement the pelletised rations that we fed to our Japanese quail. In more recent times, it has become an important part of the diet that we provide to our Jade Perch.

In the right conditions, this tiny plant can double its mass every 24 – 48 hours. Close control of the production parameters for duckweed is relatively easy in the small ponds and tanks favoured by backyard food producers.

Its explosive growth rate enables you to harvest and feed fresh duckweed on a daily basis.

At 35% to 40%, it has a higher protein level than Soya beans and higher concentrations of the essential amino acids, lysine and methionine than most plant proteins.

The other great news is that growing duckweed is easy.

You can purchase your initial stocks from most aquarium supply shops…or from vendors on Ebay.

You can use any open tank, large tub or in-ground pond. Place smaller containers in semi-shade or somewhere that you are able to shelter them from the worst of the summer heat.

You should aim for complete and dense cover of duckweed (within the range 0.6kg/m2 – 1.2kg/m2) for backyard farming purposes. Much below this and algal blooms will be an issue and much above it will cause it to self-mulch. Wind or fast-flowing water will also cause diminished production due to self-mulching.

While a variety of organic materials can be used to supply nutrients for duckweed, the logical source for Aquaponicists is their fish tanks. Of particular importance to aquaponicists, is the plant’s nutritional preference for nitrogen in the form of ammonia.

Duckweed is capable of rapid growth in water containing trace elements of nutrients. Interestingly, we almost killed off a batch of duckweed through overdosing it with poultry manure.

Duckweed grows across a wide temperature range – between 6oC and 33oC – but we’ve determined that it grows best in a range of 18oC to 24oC. We know that growth slows progressively up to 30oC and the plant begins to die off quickly at around 33oC.

While it will live in pH 5 to 9, the optimum pH for growing duckweed is in the range of pH 6.5 to 7.5 – also the preferred range for aquaponics systems.

Feeding out duckweed is as simple as dragging a kitchen sieve through the duckweed tank and placing it into your fish tank.

To avoid the duckweed from being pumped out of the fish tank, we made up an inexpensive duckweed feeder from a bucket with the bottom removed. The bucket is suspended in the water and the duckweed is placed into the bucket. This arrangement allows the fish to access the duckweed without distributing it throughout the tank. 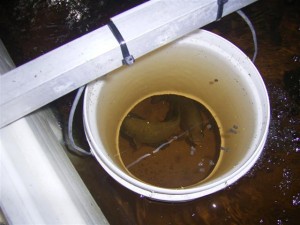 Surplus duckweed can easily be dried and stored for later use. When drying small quantities, we allow the duckweed to drain in a kitchen sieve and then spread it thinly over several thicknesses of newspaper or kitchen towel. Turn it over several times each day for two or three days. Store it in an airtight plastic container.

Freezing is actually our preferred duckweed storage method. We simply gather up the tiny plants in a small kitchen sieve and squeeze the excess water out of them before arranging the mass in a shallow plastic container.

After freezing, we turn it out of the plastic mould and place the duckweed biscuit into a large storage container. Whenever we need duckweed for one of our fish, we select what we need from the storage container in the freezer and float it on the surface of the fish tank. 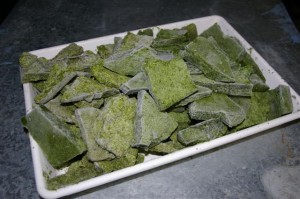 To summarise, duckweed is a high quality source of plant protein that grows quickly, costs virtually nothing to produce and requires little labour. It offers the added benefit of being able to remove nutrients from water.

Our first challenge was to learn how to grow duckweed in consistent, predictable quantities.

Our current focus is on the full integration of the plant into an aquaponics system. We want to be able to grow duckweed to remove nutrients, feed fish and other small livestock and to conserve water through reduced evaporation.

Duckweed is a must have for Microponicists.

This article was first published in May 2009 and reviewed in October 2017.