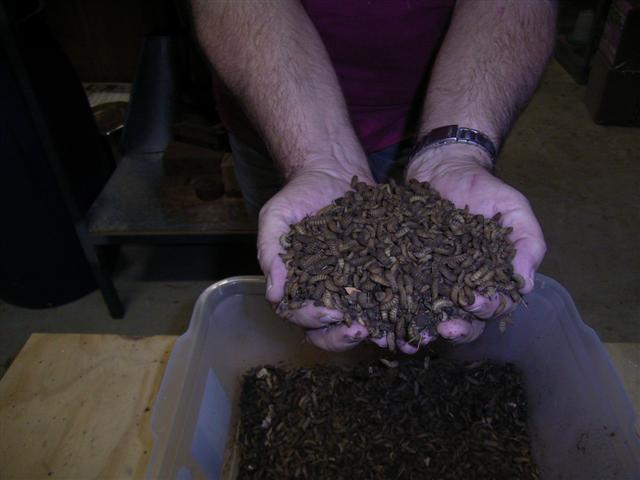 How would you like to be able to produce large quantities of live animal protein….out of thin air?

The Soldier Fly is arguably one of the best kept secrets of sustainable farming.

The larva of the Soldier Fly can be used to convert large quantities of organic wastes (including fruit and vegetable residues, offal and manure), into high quality animal protein that can then be fed directly to chickens and fish.

The good news doesn’t end there. This remarkable creature is genetically programmed to harvest itself. When it reaches maturity, it will climb out of its food source, crawl up a ramp (cleaning itself as it goes) and drop into a container ready for collection.

SF adults do not go into houses or eating places. They do not have functional mouth parts so they do not eat waste and nor can they regurgitate on human food.

They do not bite or sting and they are not associated in any way with the transmission of disease. Not only do they not behave like the irritating flies that afflict humans, Soldier flies actually reduce housefly numbers by 95% – 100%…..by denying the flies access to food.

The mere thought of associating with worms and flies (much less fly larvae) usually fills most people with a sense of revulsion and the notion of close contact with bacteria raises thoughts of pestilence and plague.

The pet industry has overcome the image issue by marketing SF larvae, as live food, to owners of fish, birds, frogs and reptiles, under the more innocuous name of Phoenix Worms.

In the quest for home-grown livestock rations, more robust smallholders have long experimented with earthworms and various types of larvae.

Producing consistent quantities of earthworms requires some skill and takes at least 90 days to produce your first harvest.

Producing consistent quantities of Housefly or Blowfly larvae will happen much faster but harvesting them will put you in direct contact with some of nature’s less endearing disease couriers.

If you want to produce consistent quantities of animal protein with little effort and without getting too hands on, then Soldier Fly larvae are for you.

They have attracted the attention of researchers because of their capacity to consume large quantities of organic waste including pig and poultry manure. So voracious are the larvae, and such are their numbers, that they will sometimes displace worms.

Like worms, they will retreat from light. Unlike worms, however, they can tolerate very hot conditions.

When fed fresh manure, SF larvae convert protein and other nutrients in the manure into insect biomass. Aside from reducing manure volume by 50%, the larvae may reduce nutrient levels by 50% – 70%.

Soldier Flies do not limit their interest to livestock manure. They will happily lay their eggs in compost bins. Quite often, the owner of the bin will be oblivious to the fact that it is Soldier Fly larvae (rather than worms) that are consuming their kitchen scraps with such vigour.

SF larvae also handle offal and dairy wastes very effectively. This is a very handy attribute because, when you process a fish, chicken or rabbit for food, about half of the live weight is going to comprise viscera (guts), skin, feathers, scales or other inedible waste that will require disposal.

Soldier Fly larvae will convert this waste to live protein leaving you with compost that has an earthy odour and the texture of ground coffee. Soldier Fly larvae manure is a very useful soil conditioner and it makes excellent worm bedding.

Adults mature and mate in the wild. Soldier fly adults congregate in small numbers near a secluded bush or tree in order to find and select a mate. After mating, the female searches for a suitable place to lay her eggs. She produces about 900 eggs in her short life of 5 to 8 days.

The male Soldier flies do not make contact with organic waste. To optimise their chances of survival, the females prefer to lay their eggs close to the waste rather than in it. About 100 hours later, the larvae hatch then crawl into the waste, which they begin to consume.

They start out white and gradually change to grey. They have the appearance of large segmented maggots and are often flat on the underside. One end is round and the other end tapers to a point.

Under ideal conditions, the larvae reach maturity in about two weeks In the absence of sufficient food, or in cooler weather, it may take up to six months for them to grow to the pre-pupae stage. SF larvae pass through 5 stages. Upon reaching maturity, pre-pupal larvae are about 25mm long, 6mm in diameter, and they weigh about 0.2 grams.

Pre-pupal SF empty their gut during their last moult and cannot feed thereafter. At this stage, the larva has everything that it needs to sustain it as it changes from pupae to adult fly.

The ability of the Soldier Fly larva to extend its life cycle under conditions of stress is a very important factor in its management for managing wastes and as a food source for poultry pigs and fish.

When the larvae are ready to become adult flies, they clear out their gut and start to look for a safe and private place in which to pupate. Famous for their ability to climb a 45° ramp, the larvae will crawl out of their food source and make their way to a collection point having effectively sorted themselves by size (only those ready to pupate will make this journey) and having cleaned themselves on the way.

The SF larvae’s capacity for self-selection makes them a better choice for small livestock diets than earthworms which still have to be separated from their bedding and sorted by size using manual or mechanical means.

Use of Larvae in Livestock Rations

Producing your own small livestock rations isn’t just a matter of economics; it’s a cornerstone of any attempt to produce clean, fresh food.

Commercial rations may contain preservatives, antibiotics and a host of questionable ingredients. The only way you can be sure that you know what’s in your livestock rations is to mix them yourself.

Dried SF pre-pupae contain up to 42% protein and 35% fat and feature an amino acid and mineral profile which leaves them well suited for use as livestock food.

Feeding studies have identified that SF larvae are suitable for use in poultry, pig and fish rations. Some researchers suggest that SF larvae are the nutritional equivalent of (and a suitable replacement for) fishmeal. This has important implications as wild catch fish stocks continue to dwindle.

Arguably, the biggest issue in using these remarkable creatures for livestock rations is overcoming the negative image that attaches to flies and insects. The simple fact, however, is that left to their own devices, small livestock will eat worms, larvae and insects – very often to the exclusion of expensive commercial rations.

Week old ducks, chickens or quail will hunt and eat flies and most species of fish will (in the wild) eat anything they can get their mouth around.

Any attempt to create sustainability that fails to acknowledge the role of bacteria and insects is doomed from the outset.

Soldier Flies and backyard farming are good for each other, no matter how you cut it.